A UPS with a programmable watchdog, wake-up and a real-time calendar for the Raspberry-Pi.

PiVoyager: the smart UPS for the Raspberry Pi

This item is currently out of stock.
Sign up to get notified when this product is back in stock.
Raspberry Pi
Power management
TweetShareReddit

Run your Raspberry Pi on battery and take it anywhere!

The PiVoyager features a Real-Time Calendar (RTC), which can be configured to store the current date and time. The content of the RTC will be maintained for as long as there is a power source connected, even if the Raspberry Pi is powered down.

Thanks to provided software the user can fully control and monitor the PiVoyager: 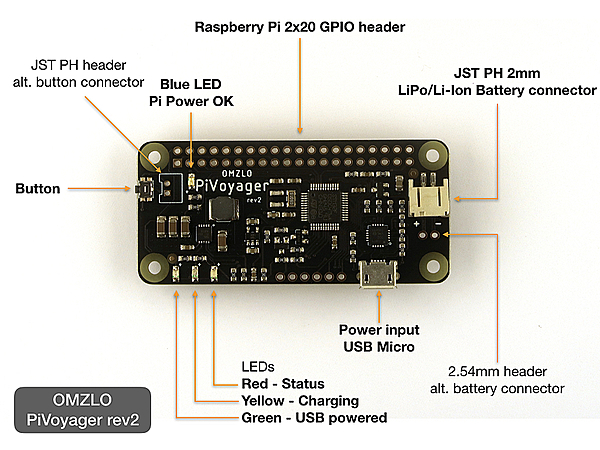 The PiVoyager has four indicator LEDs, 3 at the bottom left and 1 at the top left:

The PiVoyager has a small button. Pressing this button for more than 3 seconds will shut down the Raspberry Pi. Once shut down, the Raspberry Pi can be restarted by pressing the same button. It is possible to add a JST PH header on the PiVoyager to connect your own tact switch as an alternative to the one provided on the pHAT.

The PiVoyager does not include battery protection circuity and should be connected to Li-Ion or LiPo batteries with their own protection circuit, using the two-pin JST PH header. An alternative 2.54mm 2-pin header is also provided for battery connection.

The PiVoyager is targetted at batteries with a nominal voltage of 3.7V, a charging voltage of 4.2V and supporting a charge current of 1000mA. The battery is considered as LOW if the voltage falls below 3.1V and will remain in LOW state until the voltage rises above 3.3V. At startup, the PiVoyager will refuse to power the Raspberry Pi when in LOW state and will wait for the battery to charge sufficiently first.

In general, in order to work reliably with a Raspberry Pi, the PiVoyager should always be connected to a battery, even if it's not charged.

Note that the PiVoyager may not work well when the Raspberry Pi is connected to power-hungry devices like SSD drives, due to current output limitations. This limitation is particularly true on the Raspberry Pi 4, which has a higher current consumption than previous models.

The PiVoyager comes with an unsoldered female 2x20 GPIO header with short leads. No battery is included but you can get one from your favorite maker store (Adafruit, Pimoroni, Sparkfun, etc.).

Optionally, for a small extra cost: 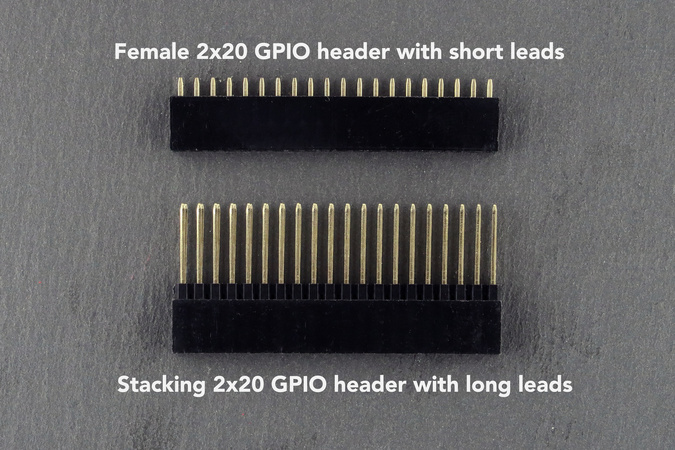 Note that the previous revision of the PCB was red. The new one is black.

More information can be found with the following links:

The PiVoyager is open-source/open-hardware. It features an I2C bootloader that enables to upload new or custom firmware if needed.

Here are some extras that might be useful for your project!
Raspberry Pi 2X20 GPIO header
Raspberry Pi stacking header with extra long leads